Ghost in the Case: Treasure Planet

"You got the makings of greatness in you, but you got to take the helm and chart your own course. Stick to it, no matter the squalls! And when the time comes you get the chance to really test the cut of your sails, and show what you're made of... well, I hope I'm there, catching some of the light coming off you that day." 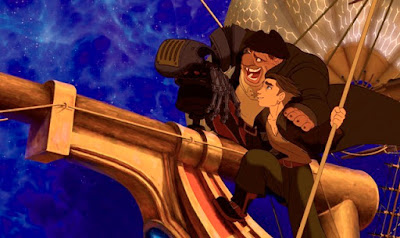 Ghost here, thanks for joining me today.  I welcome you to another 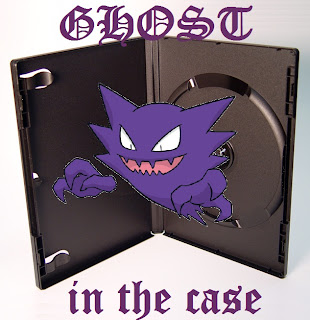 There are some stories that are unforgettable... stories that stand the test of time.  These stories have been around for years and will continue to be around for decades to come.  With time, of course, comes adaptation and change.  Each person wants to add something different to the story while keeping the same core story intact.  We've seen countless retellings of Snow White, and Beauty and the Beast and I guarantee in the next 100 years we'll see countless more. It's natural to want to see a different take or a different side on a cherished story.


Treasure Planet is one such retelling of a classic story.  It takes the classic tale of Treasure Island but places it in space.  This is one that I admittedly hear people talking about a little more lately because more people are taking a closer look at this film as opposed to when it was first released. Is this a faithful retelling of Treasure Island or was this particular idea best left forgotten? 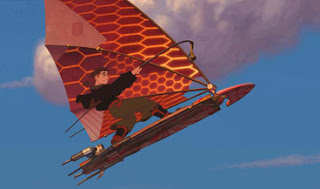 Jim Hawkins is a troubled teenager who grew up with pirate stories and is constantly in trouble with the local law enforcement.  He and his mother run an inn which is barely making it.  One day, a small space ship crash lands outside of the Hawkins' inn and an old salamander type creature named Billy Bones emerges from the wreckage with a treasure chest ranting about a cyborg.  Within minutes old Bones has passed away and has given Jim a strange looking orb.  Suddenly a group of pirates attack the inn burning it to the ground as Jim and his mother escape with help from their friend Dr. Doppler.

At Doppler's house they discover that the orb is actually a star chart with every known planet out in existence including the legendary Treasure Planet, the secret fortified planet where pirate Captain Flint kept all of his treasure.  Seeing this opportunity, Doppler funds an expedition complete with Captain Amelia, First Mate Mr. Arrow, and a rather dangerous looking crew.  Doppler decides to take Jim with him on the voyage in the hopes that it will mature him along the way.  Captain Amelia tasks Jim as the cabin boy and puts him to work under the ship's cook, a cyborg by the name of John Silver. 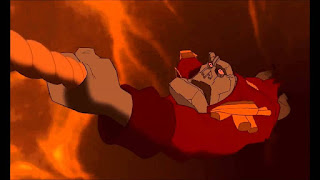 As the ship heads towards Treasure Planet, Jim and Silver get to know each other better and foster a sort of Father/Son relationship that Jim never had since his father abandoned the family.  After the first mate is murdered by one of the crew making it seem that Jim hadn't tied the ropes properly, Jim happens to overhear the crew's plan to have a mutiny and take the treasure map for themselves.  Jim rushes to warn the captain as the mutiny begins earlier than planned.  Believing he has grabbed the treasure map (which was actually a transforming pet named Morph) Jim escapes with Captain Amelia and Doctor Doppler only to crash land on Treasure Planet.

With Amelia hurt from the ordeal and Jim discovering that he had picked up Morph instead, Jim tries to find a sneaky way back up to the ship in orbit around the planet to track down the real treasure map.  Along the way he runs into a robot named BEN who has completely lost his memory banks.  The pair of them hijack one of the pirate longboats and make their way back to orbit and retrieve the treasure map.  Upon returning to camp, however, Jim discovers far too late that Silver and his gang have taken the Captain and Doppler captive as Silver takes the map from Jim's hands. 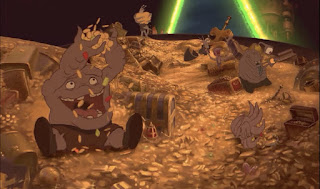 Following the orb's path, the pirates and captives come to a ledge and through Jim's cunning learn that the orb powers a large portal which opens up to any planet known to exist with the simple touch of the hologram.  Jim touches Treasure Planet's hologram and the portal opens to a treasure room which would make Aladdin's Cave of Wonders jealous.  However the celebration doesn't last long as Jim finds BEN's memory banks held by the skeletal remains of Flint.  BEN now remembers the booby traps that Flint had place in the treasure room as the planet begins to self destruct.  Due to the chaos Jim is tossed from a boat and is hanging on to a ledge for dear life.  Silver hesitates as he could pilot the boat out of there with enough treasure for a lifetime but abandons it to save Jim's life.  The pair escape the treasure room and by using the portal get the others back home safely.

As BEN, the Captain, and Doppler celebrate Jim's work, he notices that Silver is missing.  Going below deck he finds Silver trying to escape on a long boat.  Silver offers to take Jim with him so the pair could explore the stars together but Jim said he was going to choose his own path because a crazy old cyborg once told him that's exactly what he should do.  The pair embrace as Jim let's Silver go.  The movie ends with everyone celebrating Jim's graduation from the academy as he looks outside to see that the clouds have formed into the shape of Silver smiling down at Jim's achievements.


What's Good About It? 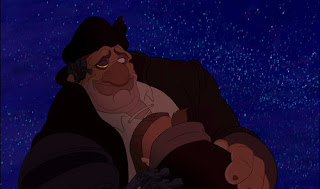 In order to get any adaptation of Treasure Island correct you have to get the relationship between Jim and Silver down perfectly, and this film does that.  Though most of the relationship is developed through a musical montage it still doesn't feel phoned in.  There are silent moments where it's just the animation allowed to portray the feeling rather than the character telling us how he's feeling.  You really believe their relationship and that though they have different paths in life they truly do care for each other as a father and son would do.  It makes the final scene of the movie powerful...cheesy, yes, but powerful as Silver is there in spirit to congratulate Jim.

One thing I really enjoyed was the slight changes they made to Jim Hawkins.  In the original book, Jim was just a young naive nice boy but in this one he was a troubled teenager always getting into trouble who had a chip on his shoulder.  Why was this a good change?  Well first off it showed real growth and change in the character that made an impact.  However what it also did was fully embrace what people were going to think anyway.  A young man by the name of Jim running around in the future who ends up going on a journey through space and becomes an officer?  The parallels to James T. Kirk and Star Trek were bound to happen and it was nice to see Disney fully embrace the similarities and run with them. 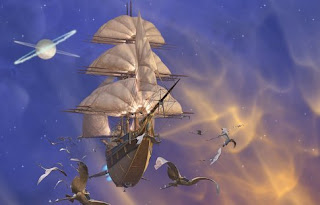 I struggled with whether or not to put this point on the "Good" list or the "Weak" list.... and that would be the artistic choices made in the film.  Obviously this film is set in futuristic space with ships that travel the stars, lasers, cyborgs, and aliens of all sorts.  Yet for some reason the ships, houses, and clothing style are all straight out of the 1800's.  I find the combination of past and future quite fun and interesting kind of like how Marvel has had to combine ancient Viking with futuristic science in the Thor movies.  However I can fully understand that some people see these contrasts as very bizarre.  For example if the ships are wooden and have no bubble of air around them then how are people surviving out in space?  I tend to not think about it and say it's a universe where there is air in space or there's something about the ship protecting them but I'd fully understand if this art style choice wasn't to your liking.


Whats Bad Weak About It.
The last time I used change the word bad to weak was for my Lost Horizon review.  I'd like to go ahead and say that this is nowhere near as good as Lost Horizon but I feel that this is deserving of the "weak" title instead for a completely different reason. 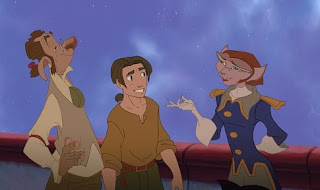 With the exception of the three things I mentioned above (Jim and Silver's relationship, the changes made to Jim's character, and the art choice) everything else about this movie is....just okay.  There's nothing outstanding going on but at the same time there's nothing to wave an annoyed finger at either.  It's all passable and decently good.  The other character such as Doppler, Amelia, Arrow, and the pirates get their job done while being decent characters though nothing really fresh or new.  BEN is your classic annoying Disney side character who shouts a lot but he's only in the last 20 minutes of the movie and I've seen far more annoying side characters than him.  The story follows the book enough and only takes liberties when necessary to fit the space theme it has been set in.  There's' not really much else to say about it because there's not much that stands out to really talk about all that much.


Final Thoughts
There are people out there of the opinion that if the majority of a film is "good but not that memorable" it's kind of the worst sin imaginable.  While I do agree that not being too incredibly noteworthy is a big problem for a film I don't think this applies to Treasure Planet.  While I couldn't talk that much about any parts other than the three good ones, those three good points are done exquisitely.  I always remember this version of Treasure Island because of the strange atmosphere, the relationship that seems real and the changes made to Jim.  They make the film a very pleasant experience.  If the thought of Treasure Island in space with a bit more weirdness and a bit more heart in it sounds appealing to you then pick up a copy and see what all those buzzfeed lists have been talking about when they mention this film.

Treasure Planet is rated PG and is available on DVD from Disney.
This is Ghost, fading into the darkness

Email ThisBlogThis!Share to TwitterShare to FacebookShare to Pinterest
Labels: Ghost in the Case