Ghost here, thanks for joining.

I'm going to be examining Doctor Who... every single episode.  I'm going to take you on a journey through the 50+ years worth of this show, showcasing the good and the bad along the way.  For each episode I'm going to give you a very brief rundown of the plot, how good/bad the story is, and anything interesting about the episode.  Basically I'll just talk about whatever comes to mind for each of them.  These will be a more in-depth overview of the series as a whole so you can see which stories or episodes (if any) you want to check out for yourself.  Today I'm going to be talking about 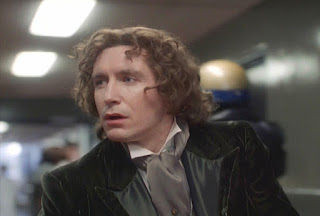 Doctor Who: The Movie

Doctor Who: The Movie (A.K.A Doctor Who, A.K.A. The Enemy Within) aired in May 1996 in Canada, the US, and the UK though on different dates.  It had been seven years since Doctor Who was cancelled on the BBC and fans of the show had never stopped lobbying for it to come back.  While the fan outcry caused the BBC to bring back the show during Colin Baker's run, the same was not true here.  In fact, there was so much hatred for Doctor Who in the BBC that it was almost a taboo subject.  British-born American Producer, Philip Segal had been dreaming of bringing the show back to life and spent many years trying to get a new series of Doctor Who produced between both the BBC and (at the time) Amblin Productions under Steven Spielberg.  It was a hard road to pave and still almost didn't happen.

There were many road bumps along the way such as another section of the BBC commissioning a Doctor Who Movie, Spielberg wishing to be removed from the project, and Segal moving to Paramount but working with Fox.  Segal was finally given the go-ahead to create a television movie that could be used as a pilot for a new series.  However, balancing Segal's wishes, the BBC's demands, the studio's demands, and Fox's demands became almost impossible.  Segal wished to honor the classic show by having the 7th Doctor regenerate but the BBC didn't want McCoy present at all.  Fox demanded that the villain be an American actor regardless of who might have been best to play The Master.  There were also so many hands in the pie when it came to the script that the final agreed-upon script was nowhere near as great as it was originally intended.   Eventually the BBC caved and allowed McCoy to regenerate but required that he remain mostly silent and the regeneration happen quickly.  Eric Roberts was also cast as The Master.

So why didn't this become a TV show?  Well, at the time Doctor Who was basically an unknown to the American community.  Fox did an absolutely horrible job of promoting the movie and placed it in the same time slot as the series finale of Roseanne.  While the UK viewership was high, the US viewership was lower than Fox wanted to deal with and backed out of the option to continue a series with the BBC.  So, this one movie is the only official piece of Doctor Who which we have between the old and new series. 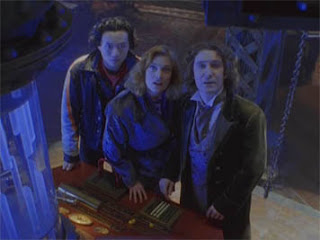 Doctor Who: The Movie

The Master has been sentenced to death on Skaro and his final wish is that the Doctor return his remains to Gallifrey.  The Seventh Doctor does so and settles down in an easy chair when the box containing the Master's remains beings to shake and a strange ooze-like snake wanders into the TARDIS console and forces an emergency landing.  The TARDIS lands in San Fransisco on December 30th 1999 and the ooze slithers out the keyhole.  The Doctor exits the TARDIS but it shot down by a group of gang members after a young Chinese-American man, Chang Lee.  Lee calls an ambulance who takes the Doctor to the local hospital to remove the bullets and sooth his rapidly beating heart (which is a normal heartbeat for a Time Lord.)  Cardiologist Grace Holloway is called in but due to the Doctor's strange anatomy she becomes lost and damages the Doctor's circulatory system killing him.  The Doctor is rolled to the morgue and Chang steals the Doctor's possessions including the TARDIS key.  Elsewhere, the ooze has stowed away inside the ambulance driver, Bruce's coat and later attacks then takes over his body.  The Doctor's regeneration, slowed by the human anesthesia takes place and the Eighth Doctor emerges having lost his memories.  Chang enters the TARDIS but the Master is close behind.  The Master convinces Chang that the Doctor stole the TARDIS from him and stole his body.  He then asks for Chang's help in tracking down the Doctor. 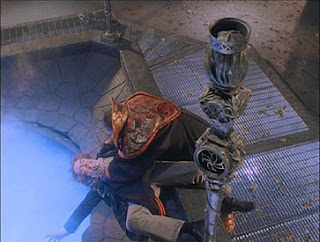 The Doctor finds some clothing items in the hospital and the next morning convinces Grace that he is the same man by pulling out the cardiac probe from his body.  The Master uses Chang's human eye to open the TARDIS' Eye of Harmony in order to track down the Doctor.   The Doctor's memories return from this experience and he realizes he must have an atomic clock to fix the TARDIS and close the Eye of Harmony before Earth is sucked into it.  Grace and the Doctor find an atomic clock while avoiding the Master and Chang and return to the TARDIS.  On board the TARDIS, the Master takes control of Grace's mind and knocks the Doctor unconscious.  The Master then starts his plan to utilize the Eye of Harmony to extract the Doctor's remaining regenerations from him.  The Doctor convinces Chang that the Master has used him but the Master kills him and uses Grace's eye pattern to initiate the Eye of Harmony leaving her free from his control.  Grace runs to the console room and finishes the final wire connecting the atomic clock part to the console which makes the TARDIS shift in time.  With the shift in time, the Doctor is able to free himself and fights with the Master who kills Grace in the scuffle.  The Doctor knocks the Master into the Eye of Harmony supposedly killing him.  Due to this, the Eye closes and causes Chang and Grace's bodies to go back in time causing them to come back to life.  Chang returns the Doctor's possessions and the Doctor offers for Grace to be his companion which she refuses.  The Doctor then hops back into his TARDIS and flies away.

While there are several things which are very good about this movie there are a lot more what are bad or confusing. 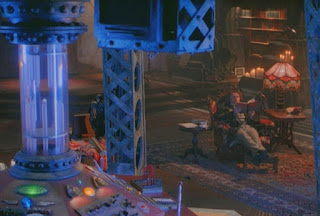 Paul McGann is a great Doctor.  He's just sort of charmingly befuddled and I love every second he's on screen.  I've said it in my introduction to the series as a whole, and I'll say it again now.  If we had gotten a full season of Eight, he would probably be my favorite Doctor.  The production value of this movie is gorgeous especially in contrast to the Classic Show.  Many parts of this are quite beautiful.  Also the TARDIS interior is the greatest that it has been...ever.  No TARDIS interior has looked this good before or since.  It was also good to see McCoy again, and his regeneration is really brutal with him screaming on the surgery table trying to explain that he would be OK and that he's not human but then dying in such a painful way.  Grace and Chang were fine... I don't feel strongly either way about them so I guess I would lump that under "good."  This also saw the brief return of the sonic screwdriver. 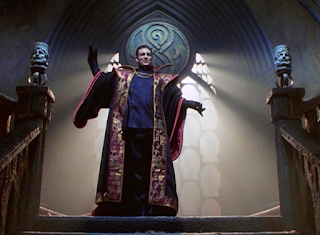 What's bad?  Basically everything else.  I try not to harp on individual actors, especially ones who have done a LOT of work... but Eric Roberts is a terrible Master.  He's easily the worst incarnation of the Master that we've ever seen.  Though that's partially because I actually enjoy the insanity they gave him in the new show... many Classic Who fans don't agree.  Roberts has two modes in this film.  In the words of Diamanda Hagan "He spends the first half trying to be the Terminator, and the second half hamming it up to almost superhuman levels."  This is NOT the Master... at all.

The reason for McCoy's regeneration makes me laugh/upset.  The Seventh Doctor, the man who perfectly organized the self-inflicted genocide of two separate races several years before the events actually took place ended up ultimately losing his life because he forgot to look at the TARDIS scanner to see what was standing right outside?  There are also many many other small points that are out of touch with continuity or just make absolutely no sense.  The Eye of Harmony was always a black hole that was hidden away on Gallifrey to power their whole lifestyle, not a small individual one on every TARDIS...though the new show tends to agree with the logic of this movie so maybe I missed something.  Why would the Eye of Harmony need a human eye to open it?  This is especially confusing when you realize that during The Deadly Assassin, Tom Baker had to leave Sarah Jane behind because humans weren't allowed on Gallifrey....so why wold they design something around human anatomy?   Why does the Eye of Harmony being open allow the Master to look out of the Doctor's own eyes?  How would Grace have known how to attach the atomic clock component to the TARDIS console in a few minutes when most of the Doctors didn't even know how the TARDIS console worked that well?  Don't even get me started on the TARDIS just randomly having Grace and Chang's bodies be taken back in time to right before they died so that they could live.... Freaking what??  This movie also makes the ludicrous claim that the Doctor is half-human...something that most people say is post-regeneration madness and the new show chose wisely to jettison that.

This is an excellent place for fans of the new show to launch into an older incarnation of the Doctor as it's probably the more accessible and easily bridges the gap between the two styles of the show and theories on the Doctor.  That said, this film is a mess, but it really didn't have any other choice than to be a mess.  With close to five different companies/individuals all making demands on the project and forcing the script to be re-written on the spot, what else would you expect?  It's gorgeous, Paul McGann is fantastic but most of the rest of this makes little to no sense.  I still suggest watching it but just be warned of the lack of coherency.  We will see Paul McGann once more but not until the end of the 11th Doctor's era.  Please join me again as we continue to examine all of Doctor Who.

This is Ghost, fading into the darkness